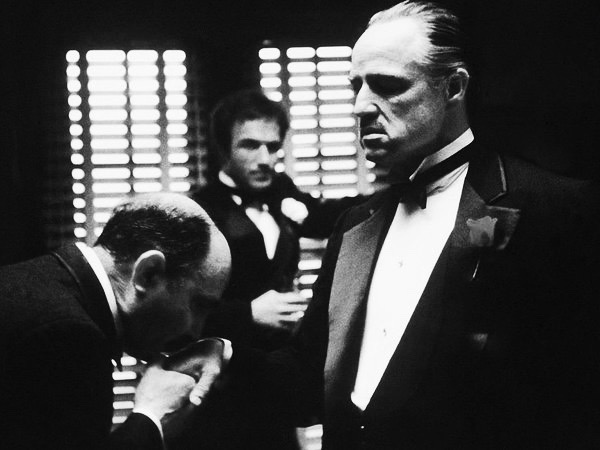 “The Godfather” is the story of Michael Corleone, and his transformation from an honourable man, a decorated war hero, to the shrewd and lethal Godfather of a New York based Mafia family.

This is a ripping yarn: an epic fable about the The Corleone family which is underpinned by the personal power and charisma of their ageing patriarch, Vito (Don) Corleone. After 10 years peace, the infiltration of narcotics is creating tension within the wider group of New York crime families. Resentment is building towards the Corleones whose wealth and power is based on booze, broads and gambling and who are strenuously opposing change.

First the father is shot and wounded, then the eldest son and heir (Sonny) is murdered, finally a shaky truce is declared, but on the death of Vito Corleone, Michael settles all the old scores (murdering the heads of the three remaining families) and wresting power into his own hands by eliminating the traitors in his ranks. He becomes the fearsome new Godfather of the Corleones

Although the character of Vito Corleone appears to be the key to the film, it’s his youngest son, Michael Corleone, who is the star of the story. He arrives at his sister’s wedding dressed in his Army uniform. He’s a war hero, who is (ironically) a ‘civilian’ in the Mafia army. After his father is wounded in an assassination attempt, Michael reveals himself as a cool headed leader. Knowing that his father won’t be safe until the corrupt Police Captain McCluskey and Mafia don Sollozzo are dead, he shoots them, and is sent to exile in Sicily.  This corruption of his innocence becomes hardened with the murder of his new bride. On the death of his brother Sonny, Michael returns to America where he slowly takes the position of his father’s heir – culminating in his becoming The Godfather to his sister’s child. At the same time, he orders the murder of his all his rivals including his sister’s husband in retaliation for the murder of Sonny. A full circle is achieved as the film ends when his new American wife (Kay – his girlfriend from the opening scenes) asks about his involvement in the family business. He agrees to tell her this one time – and then lies to her. His corruption is complete.

The machinations of the Corleone ‘family business’ and the dynamics between brothers and sisters, between husbands and wives, friends and colleagues create both the fabric for the film, and the bedrock for Michael’s journey.

Elder brother Sonny Corleone’s hot headed inability to strategize; Middle child Freddo’s louche weakness; and Sister Connie’s tempestuous relationship with her husband lead us through the workings of the family – with the Corleone’s standing in for the other crime figures that they rub up against, The Tattaglias, Barzini and Zaluchi.

The film opens on the day of Vito Corleone’s daughter’s wedding – a day in which he can refuse no request. We hear a number of requests: an undertaker request for murder as revenge for the dishonour of his daughter; Johnny Fontane wants the part in a movie; Luca Brasi (sp?) wants to reaffirm his loyalty to The Godfather. Throughout the movie these three requests are fulfilled, and the token of loyalty is redeemed. Through it all, we see that the foundation of The Mafia empire is ‘Fear’, and the obligations of loyalty.

My copy of the script is listed as Draft 3. It’s close to a final – possibly a shooting script, but one which has subtle changes to the final film.

As with Casablanca – I’m impressed by the length of the script. I received a contract from Warner Bros several years ago which obligated me to a script which was no longer than 128 pages. It is not uncommon to be asked for a script to be limited to 110 pages. Australian producers prefer them to be between 96 and 104 A4 pages.

For all that length – the screenplay is a bloody good read. Literary. Every glass of wine and vapour of blood is lovingly realised on the page.

The result is a tremendously complex and engrossing drama. The characters are beautifully drawn, and stand out against each other – creating a real tension between them. The three sons, Sonny, Fredo and Michael are all generous and tender with each other: all clear eyed about their position in the world, with Michael – ultimately revealing him to be the most cool headed and best suited to lead the family.

The pace is luxurious – and full of the tensions of a booze fuelled Christmas. The heightened sense of Catholic ritual and the intricate family ceremonies – even the violence – is performed to the pace of a waltz in a medieval castle.  (I know, I know – it’s an anachronistic metaphor, but the film is set in the mid 1940’s – so the waltz is modern and the fortified castle is old.)

The script allows itself some naturalistic humour – most of which is black, all of which arises from the plethora of male company…

Sonny
I want somebody very good, very safe to
plant that gun. I don’t want my brother coming
out of that toilet with just his dick in his hands.

But it’s the banality of daily life, and the tenderness of the ordinary which ultimately creates a sense that this is taking place in the real world, with all the awkward viscera of life. People don’t die cleanly. The ties that bind us are messy. The price of fear is death.

Luca looks up at him. Then Sollozzo pats the other hand, almost affectionately.  Luca is just about to twist his hands away, when they both clamp down as hard as they can. [a knife in the film] Suddenly, a garrote is thrown around his neck, and pulled violently tight. His face begins to turn to purple blotches, and then hangs out, in a far more extreme way than a normal tongue could. His eyes bulge.

One of the men looks down at him in disgust as Luca’s strength leaves him.

BRUNO
(making an ugly face)
Oh Christ… all over the floor.

In another, similar moment – hitman Clemenza’s wife has told him to pick up some canola. Later, after Paulie is shot – he tells his accomplice (Rocco) to “Leave the gun. Take the Canoli.” (Apparently an ad lib, since it’s not in the script.)

The dialogue is very natural, and full of ‘patois’ which flavours it with garlic.
sweet tonnato = if only
consigliere = counsellor… now lawyer
finocchio= offensive for a homosexual
stronzo = asshole
vaffanculo = fuck you
pezzonovante = 95 caliber or literally “big shot”.

Speeches vary wildly in length from the opening monologue by Bonasera, which consumes the whole first page, to the clipped banter of colleagues:

He mops his sweating forehead with a big handkerchief. PAULIE hustles, gets a glass of icy black wine, and brings it to him.

PAULIE
You look terrif on the floor!

CLEMENZA
What are you, a dance judge? Go do your job;
take a walk around the neighborhood….
see everything is okay.

The different dialects between the wasps and the Italians are pronounced – with the police and Hollywood executives using the foulest racial epithets which etch the gangster’s alienation, and reinforce the need for them to band together. Woltz (prior to receiving a horse’s head in his bed,) says to Hagen (Don Corleone’s adopted son and consigliere)

WOLTZ
You smooth son of a bitch, let me lay it on the
line for you, and your boss. Johnny Fontane
never gets that movie.  I don’t care how many
Dago, Guinea, Wop, Greaseball, Goombas
come out of the woodwork!

But my favourite exchanges are the asides – the banal filigree which most to establish The World we are in.

(Michael) glances at the THUGS in the kitchen. Tries to shield the phone.

Michael glances at the hoods at the kitchen table. He curls up in a corner and in a quarter voice:

Clemenza is getting ready to build a tomato sauce for all the button men stationed around the house.

CLEMENZA
How come you don’t tell that nice girl you love her…
Here, learn something… you may have to feed fifty
guys some day.  You start with olive oil… fry some
garlic, see.  And then fry some sausage… or meat
balls if you like… than you throw in the tomatoes,
the tomato paste… some basil, and a little red wine…
that’s my trick…

The plots are so beautifully interwoven, that it took me until I saw the film to fully appreciate the act breaks:

Act 2 (page 70) ends with Michael and Enzo on the steps outside the hospital. Enzo, the baker who has stopped by to visit his daughter’s Godfather, is terrified. His hands tremble so that Michael has to take the lighter from him – and notices that his hands are steady. Unlike his brothers – Freddo who collapsed into the gutter in useless tears when his father was shot, and Sonny who is an explosive ball of unfocussed machismo – Michael is the steady one… the one who can do this. After that he stands up to the policeman and shoots Sollozzo – at which point we are galloping away into the Third Act (**that’s his moment of decision**)

Act 3 (120) Sonny is dead – Michael is being recalled to America – and Fabrizzio accidentally kills Michael’s wife. Michael is punished for killing Sollozzo, and his heart is hardened.  He returns to take him place as head of the family business.

Gangster writ new. In the wake of James Cagney and Humphrey Bogart, The Godfather is a breath of realism. The first of its kind – a realistic and formidable anti-hero that leads to a new wave of crime films such as Chinatown, Serpico, Scarface…

Mario Puzo is a first generation American to Neopolitan Italian immigrants. He grew up New York’s Hell’s Kitchen and worked as a journalist in pulp magazines. He wrote the novel The Godfather in 1969, and it sold in excess of 10million copies putting it on the all time best seller list for fiction.  It is a beautifully literate screenplay that is faithful to the book. This is his first credit as screenwriter.

He co-wrote the screenplay with Writer, Producer, Director Francis Ford Coppola. Coppola is a formidable all round American talent having previously been Oscar nominated for his screenplay Patton (With Edmund H. North), and worked with Roger Corman (on brilliant titles such as “The Bellboy and the Playgirls”, “The Terror” etc…) And also produced George Lucas’s early films, “THX” and “American Graffiti”. He subsequently directed such masterpieces as ‘The Outsiders’ and ‘Apocalypse Now’

The Draft I read was not the final script. One small delight I had was that it had plainly been typed on a typewriter and had the simple typos that gladden a dyslexic’s heart. Also, being written pre-computer, my copy of the script had, at some point, literally been cut and pasted together into it’s current form.

A genuine masterpiece. Timeless in its excellence. Subtle, human, horrible. An utter pleasure to read, and engrossing to watch. The juxtaposing of violence and family, of faith and horror…

COULD YOU FILM IT TODAY?

Absolutely – but I doubt you could do it better.

“Leave the gun. Take the cannoli.”
“It’s not personal. It’s strictly business.”
“I’m gonna make him an offer he can’t refuse.”
“Either his brains or his signature will be on the contract.”
“He sleeps with the fishes.”
“What are you worried about? If I wanted to kill you you’d be dead already.”

James Caan originally heard the phrase “bada-bing!” from his acquaintance, the real-life mobster Carmine Persico, and improvised its use in the film.

Fabrizio, Michael’s Sicilian bodyguard who planted the bomb that killed Appolonia, was supposed to be found by Michael at a pizza parlor he opens in America and subsequently blown away with a shotgun at the end of the movie as per “The Godfather” novel. This scene was filmed but ultimately cut because the makeup artists plastered Angelo Infanti with so much fake blood that the scene looked ridiculous.