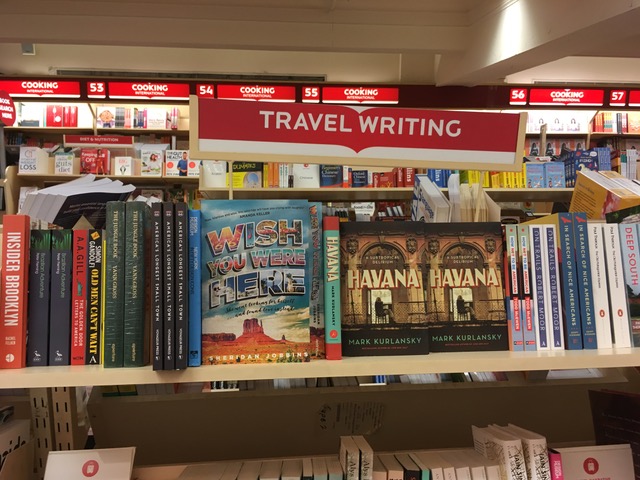 Sun Tzu and the Art of Bookselling

A big motivation for this whole adventure was to put the book in front of readers in the run up to Christmas. The publicity was the way to reach as many people as possible, but by visiting bookstores I hoped to reach people buying books. So that’s what I planned to do. Visit bookstores. Uninvited. Just – turn up.

The first place I went to was Berkelouw’s in Balgowlah. I looked around and found a copy of the book, then went over and introduced myself to the man on the till.

“Hi, I have a book in publication, and I see that you stock it, so I wanted to introduce myself and point it out.” I didn’t get the man’s name – but golly he was nice.

So, for the first time, I rolled out my spiel. “It’s a real life rom-com. A memoir about how I met my husband. It’s about buying a shiny red car and doing wheelies around America. Our third date was six weeks in a tent and a Chevy Camaro. I wrote it as a holiday read – to take on the road, or if you can’t get away. A vacation with a happy ending… Does that sound right?”

He thought it sounded great!

We talked for a while about what booksellers wanted to know. He told me they’d sold three copies. He had four copies to start with and only one left. It sounded puny to my filmmaker ears, but he said it was good, and went on-line to stock more.

He made me feel so good about turning up, I forgot to take his photo, his name, or anything. After I left, I took a photo of myself outside the shop. If I look a bit spaced out, I was actually buzzing on the dopamine. It was like I’d bowled up to a stranger and demanded, “Say something nice about me.”

Bookoccino in Avalon was the first place which didn’t have the book. That was disappointing because it’s in a bookish sea-side village with plenty of film makers. Still – I wheeled out my newly minted spiel while the shop assistant looked the book up on line.

“Oh, wait,” she said when I got to the bit about the car, “I have heard about this…” Turns out Emily from Affirm Press had phoned to them. We’d owned a house in Whale Beach when I was a kid – and she’d tried to hang an author talk on that.

The only way to brazen this out was to be super up-beat. You didn’t need to be a detective to know the woman behind the till had her work cut out for her. The place was over-flowing with books from the printers, so rather than suck all the energy out of her, I talked to the other shoppers as well, and was upbeat about their choice of books.

Berkelow Books in Dee Why

On the way back to Sydney I stopped in to another Berkelow Books, this time in Dee Why. Gillian May took time out of restocking to get me to sign the few copies they had in store.

While I was doing that, I told her I’d noticed that most of the books which came out at the same as me – almost none of them where still in the stores. A whole new generation of sports stars where smiling out of the Biographies. Brigid Delaney’s Wellmania was still on display. And Please Explain: The Rise, Fall and Rise Again of Pauline Hanson  by Anna Broinowski but almost nothing else.

“Six weeks,” Gillian explained. “After six weeks, if we haven’t sold the books they’re returned to the publishers.” Mine had sold well enough to still be in the store, but had been moved inside the store. I had a second lease of life, but if they weren’t sold by Christmas…. it would be curtains.

Gillian’s advice was a real wake up call. I was still thinking about it as I entered Dymock’s head office in the City. The shop was heaving with six weeks till Christmas. A girl at the door handed me their summer reading catalogue.

I walked through the shop to the biography section.

I asked around – there was also an Australian biography section.

I went to the till and asked them to look it up in their computers. They had a monumental 35 copies in stock! In the Travel Writing section.

When I found it – I couldn’t find the book.

When I found the book it was buried in ‘America’.

Childish tears sprang to my eyes. It was like finding my child in wet undies at kindy.

Ok – let’s not get too sentimental. I asked around and found a young assistant whose name tag said Angus Chapman. He sounded chuffed to be meeting an Author.

“Garth Nix came in the other day. That was exciting.”

Angus wants to be a fantasy writer. We got talking about how much fun it was to have my first book published… And I asked (some might say begged) him to take some copies of my book down to Australian Biography.

“I had a look,” I said hopefully, “There’s a gap between Clive James and Amanda Keller – ”

“I think it really helps who you’re next to in the bookstore,” he replied, scooping up a handful of the books.

“Sure,” he replied, carrying them towards the escalator, “we call it redecorating. Authors come in and do it all the time.”

He also confirmed the six week rule, before wishing me luck and going back to work.

I don’t believe in luck. I resolved to visit every independent bookstore I could. And if there wasn’t an independent store in the towns I was going to – I’d visit Big W or K-Mart and redecorate my book all over the shop.

I even made a map where I plotted all the bookstores along the route I planned to take. I’ll give you six weeks.

Books have six weeks in Australia to see if they’re going to fire the imagination. Publishers need to put all their advertising revenue into that first push, and even then have to pay for a number of promotional items – like getting into the window displays, being considered for recommended reading lists.

At first this seemed cynical, but like life it’s not just about being in the right place at the right time – you also needed to be there with the right goods. Nothing – except maybe an appearance on Richard Fidler’s Conversations – will replace good word of mouth.